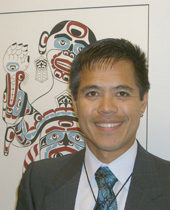 Aboriginal Health Physician Advisor for the province of British Columbia. Deputy Provincial Health Officer for British Columbia. Former film and television actor, notably in the television series 'The Beachcombers' and 'DaVinci's Inquest', and the films 'Smoke Signals' (1998) and 'The Business of Fancycancing' (2002). Won an Independent Spirit Award for Best Debut Performance in the former, and an Outfest Award for the latter. Specializes in HIV/AIDS in First Nations communities.