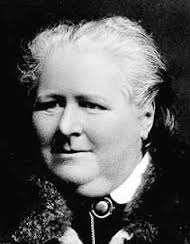 A writer and ardent support of women’s suffrage, Frances Power Cobbe was the creator of the animal rights movement. In the process, she founded the first animal advocacy groups: the National Vivisection Society (NAVS, 1875), and the British Union for the Abolition of Vivisection (BUAV, 1898).

Born as the only girl in a religious family in Dublin (she was a direct descendent of Charles Cobbe, Archbishop of Dublin from 1743-1765), she found herself disadvantaged in school and society relative to her male acquaintances. This experience forced her to consider a woman’s place in society. The early death of her mother caused her to question her religious beliefs and she eventually declared herself agnostic. Cobbe published her first thoughts on this matter in the book An Essay on the Intuitive Theory of Morals (1855) in which she argues that morality is inherent in everyone intellectually and not grounded on church laws. The book was an immediate success.

Cobbe began offering her services to the disadvantaged and unemployed. She also began contributing articles to various prominent newspapers concerning the need for social change to improve society. Cobbe soon moved to London and immersed herself in the movement for women’s rights. She was eventually a member of the executive council of the National Society for Women’s Suffrage, and she became a close friend of John Stuart Mills.

Her writing on the topic of women’s rights was prodigious. Among the many books she wrote are included Criminals, Idiots, Women, and Minors (1869), The Duties of Women (1881), and The Hopes of the Human Race, Hereafter and Here (1876). Her pamphlet Wife Torture influenced the Matrimonial Causes Act of 1878 which gave a wife the legal right to separate with maintenance from a husband on the grounds of assault. Cobbe published articles on women’s rights in almost every major periodical of her time. Cobbe began her campaign for animal rights as vigorously as she had for women’s rights. She saw a similar degree of men’s brutality to animals as she had to the abuse of women and children. She was appalled by the abuse of animals used in research and scientific endeavours. Particular attention was paid to the use of vivisection – the practice of dissecting animals while they are still alive for the purpose of scientific study. Cobbe began publishing a series of pamphlets on the subject which instigated popular outrage and disgust in the public. Her aim was to affect change in the practice around the world.

In 1875, Cobbe founded the NAVS to coordinate this educational and opposition process. This led to the Cruelty to Animals Act of 1876 which called for greater regulation and oversight of vivisection. This was an early triumph for animal welfare activists, and was the first time in history that government legislation addressed issues of animal welfare.

Nevertheless, Cobbe felt that the Act did not go far enough and she continued in her campaign for animal rights until her death. She argued on moral grounds that kindness and protection of those in life who are weaker and suffered was necessary for the achievement of personal peace.

Cobbe formed a romantic partnership with the sculptor Mary Lloyd whom she met in 1861. They lived together from 1864 until Lloyd’s death in 1896. Throughout her life, and in her correspondence, Cobbe referred to Lloyd as her husband and wife. Frances Cobbe wrote her autobiography The Life of Frances Power Cobbe by Herself in 1894.

Cobbe argued for the moral autonomy of women throughout her life, and against the abuse of women, children and animals by the stronger dominant male sex. She identified with the sense of sexual difference with women and the need for equal rights to entrench such differences. These thoughts were clearly identified with her lesbian orientation throughout her life. These principals remain a dominant theme for the LGBTQ rights activists today.