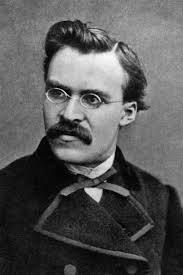 As a philosopher himself, Friederich Nietzsche’s pioneering work laid the foundations for philosophical extensions that followed, including existentialism, post modernism, transcendence, cultural relativism, atheism, and reincarnation. His search for a higher level of freedom and satisfaction led him to reject the strictures of logic and rules that were imposed by certain religious philosophy which, he argued, led to a ‘slave morality’.

Nietzsche’s early education was in languages and philosophy with a particular emphasis on Greek, Latin, Hebrew, and French. At the University of Bonn and the University of Leipzig, he continued these studies and added theology to the mix. Ultimately, he focussed his energy on the study of philosophy.

At the age of 24, Nietzsche became the youngest professor of classical philology at the University of Basel in Switzerland. He gave up his German citizenship at this time and remained stateless for the rest of his life. He published several important works on philology while at Basel, particularly the book Philology of the Future.

One of his most important works, The Birth of Tragedy (1872) caused a particular sensation. In it, Nietzsche celebrated what he saw as the irrational and emotional aspects of Greek culture over the staid and restrictive teachings of Christian philosophy popular at the time. Nietzsche felt that the creativity which came from the wilder Greek philosophy and culture had been stifled by the forces of logic and order being imposed by his contemporaries.

In 1879 Nietzsche had to resign his position in Basel due to declining health that would plague him for the rest of his life. He remained with his friend Paul Ree for the remainder of his life. His writing continued, however, and his notable works that followed include The Gay Science (1882-1886) and Beyond Good and Evil (1886).

These books continued his theme of challenging Christian beliefs. He rejects any sense of universal morality, arguing that different moralities can apply in different circumstances and cultures. Indeed, he argues for the concept of a ‘superior man’ who rises above restrictive morality to a new plateau of freedom and eventually domination. Nietzsche praised the joy of life in the Italian Renaissance and pronounced that God is dead – controversial statements for his time. It has been argued that this theory was the basis for the rise of Nazism in Germany, though there is no direct evidence that this is what he was espousing.

For a short period during this time, Nietzsche had a close friendship with the German composer Richard Wagner. However, when Wagner began openly chastising Nietzsche about his homosexuality, the friendship ceased. This was a highly fashionable topic at the time because many knew that Ludwig II, the King of Bavaria, was homosexual.

Nietzsche’s philosophy came about as a result of his struggle with the pessimism and dampened thinking of popular philosophy of his time. There is no doubt that it also came from his internal struggles with homosexuality. Throughout his schooling and university days, Nietzsche had many romantic same-sex relationships. It was through his early relationship with another student, Erwin Rohde, that he was introduced to ancient Greek culture. He wrote several poems about his same-sex relationships. As a member of the Franconia fraternity he had several homoerotic experiences with other students.

Nietzsche’s health continued to deteriorate quickly and he died at the young age of 56 from a brain tumor. His homophobic sister edited his work during his incapacitation to the point of destroying much of his controversial writings.

Nietzsche idolized the world of the ancient Greeks and saw its life and strength destroyed by the rigidities of Western philosophy and religion, which imposed reason and strict moral codes. These he saw as barriers to sexual liberation, and they have haunted the LGBTQ community for generations. To the LGBTQ world, the breaking down of these soul-destroying codes, which arise from the imposition of shame and control, will create new vitality, joy, and life.