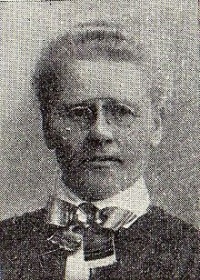 Teacher and Member of Parliament (1906-1910), being the first lesbian member and one of the first group of 19 female members (women were allowed to run for parliament beginning in 1906). Speaker for women's suffrage through the Finnish Women's Association, of which she was Vice President. Had numerous relationships with other women, as detailed in her diaries. Author of numerous children's songs, poetry and short stories.

Kakikoski’s achievement is another example of how LGBTQ progress is tied into the progress achieved with other issues of diversity, such as sex, race, or religion. At the time, sexual diversity was certainly less on the agenda and, in this case, women’s suffrage higher on the agenda. Nevertheless, progress and history on LGBTQ rights was achieved in tandem even though the LGBTQ progress is seen more on historic reflection. Her historical achievement shows how diversity in all its forms is a simple case of human rights that encompass minorities. As is typical of the case, though, the advancement of LGBTQ rights was kept hidden for a long time because of the timidity of others outside the community to publicly acknowledge the true and whole spirit of the individual in an attempt to diminish the importance of the LGBTQ community.