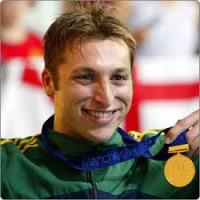 Swimmer who specialises in freestyle, but also competes in backstroke and the individual medley. Has won five Olympic Gold medals (2000 - 3 gold; 2004 - 2 gold), eleven World Championship golds (1998-2003), and numerous other medals. Retired from swimming in 2006, and further attempts at a comeback have been dogged by injury and illness. Notable bouts of depression, alcohol, and suicide were followed by his recent announcement that he was gay and stories of bullying as a youth. Created the Ian Thorpe Fountain for Youth to raise funds for children's causes. Author of his autobiography, 'This Is Me' (2012).