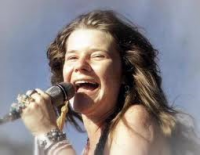 Rock singer during the psychedelic 1960s musical era, notable for such albums 'Cheap Thrills' (1968) and song 'Me and Bobby McGee' (1969). Was both a solo singer, and a founder/member of the Big Brother & The Holding Company, the Kozmic Blues Band, and the Full-Tilt Boogie Band. Considered one of the most influential rock musicians and singers of her generation. Died of a drug overdose. Member, Rock & Roll Hall of Fame (1995). Grammy award for Lifetime Achievement (2005). Bisexual.