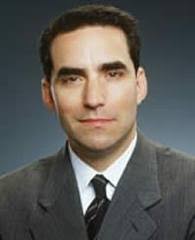 Co-Founder and CEO of Trint, a London, U.K.-based tech company. Former ABC News correspondent, both for Europe and for Florida, the Caribbean and Latin America. Recipient of the Edward R. Murrow Award, a duPont Award, and shared a special Emmy Award for ABC’s coverage of the terrorist attacks on September 11, 2001. Received two Emmy nominations in 2007. In 2011 he won an Emmy for his coverage of the Libyan Revolution and the downfall of Col. Muammar Gadhafi.