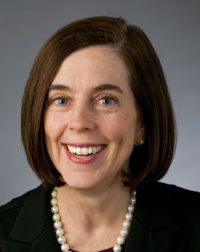 Governor of the State of Oregon since 2015, becoming Governor when the incumbent was forced to resign. Re-elected Governor in 2016, making her the first LGBTQ-elected Governor in the country's history. Former Democratic Secretary of State for the state of Oregon (2009-2015). Former Oregon State Senator (1997-2009) and majority leader in 2004, the first woman to hold that role. Member of the Oregon State House of Representatives (1991-1997). Lawyer, taught at Portland State University. Bisexual.