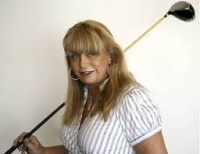 Transgender professional golfer who filed a federal lawsuit in 2010 against the LPGA, arguing that its requirement that competitors be “female at birth” violates California civil rights law. After winning the women’s world championship in long-drive golf with a 254-yard drive into a headwind, she was advised by the 'Long Drivers of America' and the LPBA that the record was invalid on this basis. This led to the LPGA removing the wording 'female at birth' from their rules and allowing transgender players to compete.