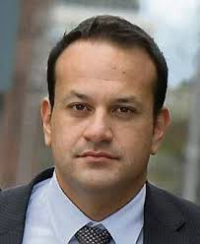 Prime Minister of Ireland from 2017-2020, being the first gay man, the youngest person, and the first member of an ethnic minority to hold that post. Fine Gael Party member of the parliament since 2003 and Minister of Health (2014=2017). Formerly Minister of Transport, Tourism and Sport (2011-2014). Formerly in local council politics (2004-2007). Named one of the world’s most prominent political figures and influential thinkers by US news publication Foreign Policy (2019). Physician.