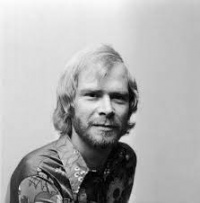 Singer and songwriter of Rythm and Blues. Born in Great Britain but emigrated to Canada. Sang with Alexis Korner's Blues Incorporated, with whom he recorded the first British blues album in 1962, 'R&B from the Marquee'. At stages, Mick Jagger, Jack Bruce and Charlie Watts were members of this band. In 1963, Baldry joined the Cyril Davies R&B All Stars with Nicky Hopkins playing piano. He took over in 1964 after the death of Cyril Davies, and the group became Long John Baldry and his Hoochie Coochie Men (later Steampacket) featuring Rod Stewart on vocals and Geoff Bradford on guitar. After Steampacket broke up, Baldry formed Bluesology. Recipient of multiple awards for his music. Paired with Elton John, Rod Stewart, and many others. Hit songs include 'Let the Heartaches Begin' (1967) and 'You've Lost that Lovin' Feeling' (1980). Albums include 'It Ain't Easy' (1971), 'Everything Stops for Tea' (1972), and 'Right to Sing the Blues' (1997). Formal name is John William Baldry.