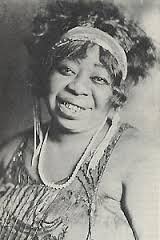 A prolific musical recorder and entertainer, Ma Rainey helped to create and popularize the newly emerging genre of the Blues during her lifetime. Her influence was so great that she has been tagged ‘the mother of the Blues’. Ma Rainey is considered the first popular stage entertainer of the blues and the first great female black vocalist. She not only sang the Blues but created them.

Born as Gertrude Pridgett, she inherited her name of Ma Rainey when she married fellow musician Will Rainey in 1904. Their initial stage performances were under the name Rainey and Rainey. With a powerful and deep voice, her talents were quickly recognized and she soon signed an exclusive recording contract with Paramount Records. She made over 100 recordings, with notable songs including Bo-weevil Blues, See-See Rider, and Countin’ the Blues.

Ma Rainey’s music and singing is noteworthy for its ability to aesthetically capture the essence of the black rural life of her upbringing and generation. This was a new sound and concept for many music listeners of the roaring twenties, and both the musical genre and Ma Rainey herself grew instantly in popularity. She is particularly noted for her partnerships with the great Louis Armstrong (such as with See-See Rider) and bandleader Tommy Dorsey.

The content of her songs dealt almost exclusively with love and sexuality, and it was this that eventually led to her nickname ‘Ma Rainey’, a shortened southern form of Madam Rainey. Sexuality has been a pillar of the Blues since its inception, which helped to make it such a powerful medium among its listeners.

Rainey’s lyrics were simple stories of heartache, working, travel, superstition, and drunkenness – all considered traits of the southern way of life at the time. Her powerful music was an inspiration to poets, including gay Langston Hughes and Sterling Brown. Indeed, Ma Rainey was the cultural model of lesbian Alice Walker’s Pulitzer Prize-winning novel The Colour Purple.

Ma Rainey’s lesbian leanings are well known. She is noted for her relationship with fellow singer Bessie Smith, the Empress of the Blues. Her lyrics often clearly refer to lesbianism and bisexuality, most notably in the song Prove It On Me Blues: 'They said I do it, ain’t nobody caught me. Sure got to prove it on me. Went out last night with a crowd of my friends. They must’ve been women, cause I don’t like men.'

Other songs from Ma Rainey also include references to homosexuality, women loving women, masculine women, and so on. Such topics are prominent in classic Blues. In part, this is because Blues grew out of a culture of marginalization and oppression of minorities in the Southern United States.

This use of direct lesbian references in her rich music was adopted by the militant lesbian and feminist movements of the 1970s. The song noted above is considered a watershed in LGBTQ history for its lyrics about lesbian desire.

Ma Rainey was part of an active scene of LGBTQ black artists and poets of her generation. They rose in popularity with what has been called ‘The Harlem Renaissance’. In her case, she brought the soulful Blues music north. Was there ever a need for Ma Rainey to be conservative or coy about her sexual preference? Not through her music, nor through her lifestyle, both of which affirms her sexuality on her own terms in a strong and vibrant form.