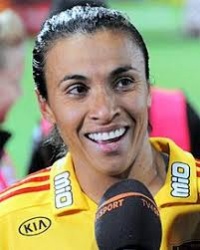 Professional football (soccer) player who plays for the Orlando Pride in the National Women's Soccer League since 2017 and the Brazil national team as a forward since 2002. She holds the record for most goals scored at FIFA World Cup tournaments with 17 goals, and the first player, male or female, to score at five FIFA World Cup tournaments when she scored in the 2019 Women's World Cup. Named FIFA World Player of the Year six times (2006-2010 and 2018). Won Olympic Silver medals at both the 2004 and 2008 Olympic summer games. Awarded both the Golden Ball award as the best player and the Golden Boot award as the top scorer in the 2007 Women's World Cup. Carried the Olympic Flag in the opening of the 2016 Rio Olympic Games. Widely considered the greatest female football (soccer) player of all time. Goodwill Ambassador for the United Nations Development Program.