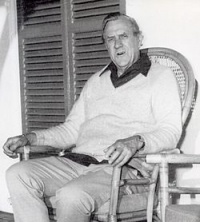 Only Australian Nobel prize winner for literature (1973). Australian of the Year, 1974. Recipient of multiple awards for his work. Notable works include 'Voss' (1957, which began his reputation as a skilled writer), `Riders in the Chariot` (1961) and `The Eye of the Storm`(1973). In 1981, published his autobiography, 'Flaws in the Glass: a self-portrait` which explored issues about which he had publicly said little, such as his homosexuality. Although he never denied his homosexuality, he also accepted the notion of the day that it was a deviant form of behavior - he accepted that judgment and considered it part of his personality. Used his prize money from the Nobel Prize, supplemented by some of his own, to establish the Patrick White literary award, intended for writers whose work had not received appropriate recognition. A life-long peace advocate. Companion, Order of Australia. Life partner was Manoly Lascaris.