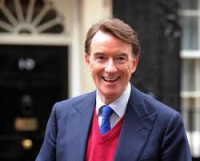 President of the international think tank, Policy Network. Former Labour Party member of Parliament and Cabinet member (Minister Without Portfolio, Secretary of State for Trade and Industry (1998), Secretary of State for Northern Ireland (1999), Business Secretary (2008)). Former European Commissioner for Trade for Britain 2004-2008. Forced to resign when it was revealed he had received a secret loan from another MP. Life peer, as Baron Mandelson of Foy.