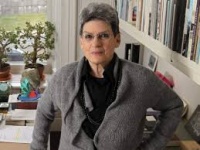 Architect and philanthropist. Noted for her work in advocating for historical architecture preservation. Designed the Saidye Bronfman Centre (named after her mother) in Montreal. Founder of Heritage Montreal (1975) and the Canadian Centre for Architecture (1979). Author of numerous books on architectural history, including 'Court House: A Photographic Document'; 'Photography and Architecture: 1839–1939'; 'Opening the Gates of Eighteenth-Century Montréal'; 'Mies in America' (2001); and 'Fortifications and the Synagogue: The Fortress of Babylon and the Ben Ezra Synagogue, Cairo'. Subject of the documentary film 'Citizen Lambert: Joan of architecture' (2007). Recipient of the Ordre des Arts et des Lettres de France (1992), a Companion of the Order of Canada (2001), and a Grand Officer of the National Order of Quebec (2005). Awarded the Golden Lion for Lifetime Achievement at the Venice Biennale for Architecture (2014), the Arnold W. Brunner Memorial Prize from the American Academy of Arts and Letters, and the Wolf Prize in Arts (2016) from the Wolf Foundation in Israel.