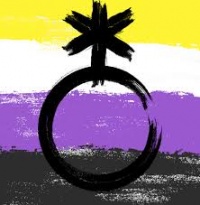 Many individuals prefer not to identify with any gender, or do not see themselves exclusively as a man or a woman. Gender is a term used to describe a person's personal identity, behaviour, characteristics, and thoughts. Individuals whose gender is not identified with male or female may describe themselves as non-binary. History tells us that non-binary individuals have existed for centuries.

The notion of being non-binary is important to accept. Language is an important means by which an individual confidently communicates their selves to others. It establishes a community and supports the diverse nature of society. Words are a powerful way to assert an aspect of an individual's gender that’s often unseen or unaligned with others’ assumptions.

Non-binary is an umbrella term that includes genderqueer, gender-fluid, agender, androgynous and gender non-conforming people – though not all will find that non-binary fits as a label for them. Many non-binary people are transgender also.

Gender identity and expression are entirely personal. Many individuals proudly state publicly their non-binary status. We have identified a number of notable members of the LGBTQ community who have done so over the past few years. These include members of the entertainment world, journalists, politicians, sports personalities, writers, religious leaders, scientists, and more.