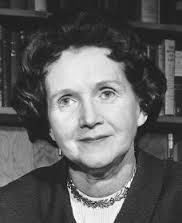 Marine Biologist who sparked the environmental movement with her stark revelations about the damage being caused by pesticide spraying. This was the beginning of a popular global grassroots movement that became concerned with the dangers of industrial and agricultural growth’s impact on the environment. Her work was the basis for the creation of the U.S. Environmental Protection Agency and similar government organiaations around the world.

Carson’s educational studies in zoology and genetics were at Johns Hopkins University from which she received a Masters Degree in 1932. Upon graducation she joined the U.S. Fisheries Bureau and began writing weekly articles and commentary on acquatic life for various newpapers and magazines.

This led to Carson’s first book ‘Under the Sea Wind’ (1941). After becoming Chief Editor of publications for the Bureau, she published her hugely popular bestseller ‘The Sea Around Us’ (1952), parts of which were serialized in newspapers and magazines. The book was on the New York Times Bestseller List for 86 weeks and won the National Book Award for Nonfiction, among other awards. Her third bestseller ‘The Edge of the Sea’ followed in 1955.

It was at this time that Rachel Caron’s research led her to concerns about the effects of pesticides on natural habitats, particularly the chemical DDT. This research alarmed her so much that she turned her focus to conservation. The result was the publication of the groundbreaking book ‘Silent Spring’ (1962). At the time of publication, countries around the world were shocked by the increasing number of deaths of birds, for example, that could not be explained. Carson’s research provided the horrifying answer.

This book caused an international sensation with its warnings and scientific evidence of the damage being caused to wildlife and insects from unbridled use of chemicals in agriculture and industrial waste from manufacturing. Carson successfully argued that government supervision in the area was largely propaganda, without true regulation of industrial manufacturers and users.

At the same time, many research institutes began investigating the impact of increasing chemical exposure to medical health, such as cancer. The publicity around these issues further boosted Rachel Carson’s very public campaign to draw attention to this global issue. Her prognosis was dire, and the future of the environment looked bleak if the issue was not addressed. The public agreed overwhelmingly. The chemical industry fought back with little success.

Regrettably, Rachel Carson was diagnosed with breast cancer shortly after the publication of this monumental book. She succumbed to the disease in 1964. Her work has been posthumously celebrated with a flurry of recognitions and awards, including The Presidential Medal of Freedom in 1980. Many conservation areas around the globe are named in her honour, along with research vessels, buildings, prizes, and more.

Rachel Carson was a lesbian. She began a life-long intimate relationship with Dorothy Freeman in 1953. Although Freeman was married at the time, they both acknowledged the deep personal relationship that lasted until Carson’s death. Carson chose to destroy all of her personal correspondence just prior to her death to avoid publicity on their relationship – nevertheless, it is well known today, although there is no certainty of the extent of its sexual nature.

Rachel Carson’s work was the starting point of the environmental movement as we know it today. Government entities sprung up around the world to study the issues and regulate them, such as the US EPA. Prior to her publications, few individuals concerned themselves with the environment.

How do activists choose their causes? In Rachel Carson’s case, her battle was against an entire industry at a time when any criticism of it or its governmental policy was highly risky. Her approach was based on stubborn and remorseless presentation of scientific facts. Her critics labeled her as hysterical and unscientific, coming from a spinster with no children and no social life, and worst of all a woman. This explains why she chose not to reveal her intimate sexual preference to the public – it would provide more personal ammunition for the detractors at a time when homophobia was rampant. In the end, Rachel Carson was forced to make a choice between her cause and her sexuality.