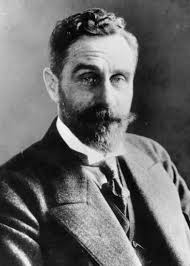 Knighted and posted to Consul-General, had to flee Ireland due to his nationalistic tendencies. On return, was apprehended and convicted of treason for his involvement in the Irish Nationalist revolt in Dublin (the Easter Rising) and hung. The case was based on his diaries (known as The Black Diaries), though many have argued that they were forged. His lover/manservant was a double agent. Known for his support for indigenous peoples wherever he was posted.