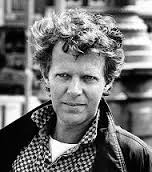 Considered the country's greatest ballet dancer and choreographer. Some of his contemporary works portray LGBTQ struggles, for which they generated considerable controversy. Involved in the foundation of Netherlands Dance Theatre, and director of the Dutch National Ballet (1968). Notable contribution to gay literature with his autobiographical novel, 'Monument for a Dead Boy' (1965). Received the Benois de la Danse lifetime achievement award and was made knight and then officer of the Order of Orange-Nassau.