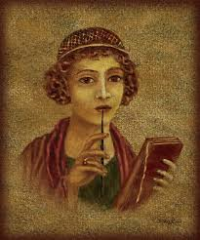 Sappho was a Lyric poet and philosopher born on the Greek island of Lesbos to an aristocratic family, though records of her birth and childhood are absent. The principal source of her adult life story is through her poetry. From this, it is deduced that she lived to a late age with her last years spent in political exile

Only two of her poems remain intact in its entirety (one discovered in 2012) but her renown is confirmed in references to her work by successive poets and philosophers. Fragments of her poetry have been collected by the Library of Alexandria. Her fame was such that her likeness appeared in early Greek coins.

Sappho is a member of the Nine Lyical Poets, a small number of scholars of Hellenistic Alexandria whose works are considered worthy of study. As a writer of lyrical poetry, her work is set and performed to music using the traditional stringed instrument of the lyre and chanted as a choral piece.

Sappho’s poetry is noted for its clear thinking and opinion on the subject of romance using precise definition and explanation. The principal topic of her poetry is love, and particularly in reference to important celebrations and events. It is the content of her poetry for which she is admired, and this is praised as direct and honest.

Same sex love is a dominant theme in her poetry and there is detail of both infatuations and intimate relationships between females. Her poems about Eros, the God of Love, speak strongly of same sex attractions. Love is not censored in any way in her works, but rather is clearly conveyed as bittersweet. This is considered a reflection of Sappho’sown sufferings. It is, of course, still not possible to confirm that this is representative of Sappho’s personal life, but such same-sex relationships were not considered unusual or abhorrent at the time.

Sappho remains an extraordinary poet of a very early age on the subject of emotional love that speaks to all humanity, and the notion that poetry could be the means of both conveying and manipulating that love. The direct nature of its content is the basis for the philosophical belief that only through the awareness of particular individual behaviour can one understand the behaviour of the collective whole. This lyric work has greatly influenced the evolution of poetry itself, with subsequent generations celebrating love as a compelling emotion. Sappho’s creation of a unique and complex metrical format, known today as the Sapphic meter, is also the lasting legacy of a great poet and philosopher.