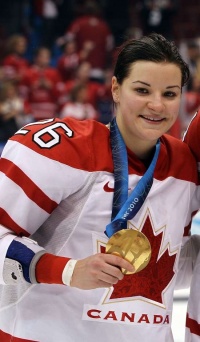 Former Ice hockey player. Won Olympic Gold twice (2006, 2010), World Championship Gold. 4 World Championship Silvers. As a college player with Harvard, she was an openly-lesbian player who won the Patty Kazmaier Award as the best player in women's college hockey (2008). Forced to retire due to injury. Has completed an undergraduate degree in psychology from Harvard, and is currently doing her Masters in Education at the University of Sherbrooke.