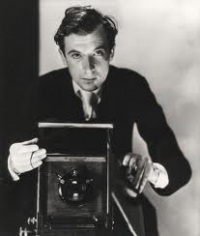 Stage and costume designer, painter, diarist. Noted photographer of royalty and stars, with a camp aesthetic. Photographer for Vogue and Vanity Fair magazines, though was fired from Vogue when some anti-semetic phrases were legibly published alongside his photographs. Most noted stage set designs include theatre productions of 'Lady Windermere's Fan', and theatre and film productions of 'My Fair Lady' (Tony Award for stage production 1957 and two Academy Awards for film production, 1964). Also won an Academy Award for costume design with the movie 'Gigi' (1958). Recipient of the Chevalier de la Légion d'Honneur (1960), and made a Knight Bachelor in 1972. Openly bisexual, having affairs with many notable men and women. One of his partners was Olympic fencer Kinmont Hoitsma.