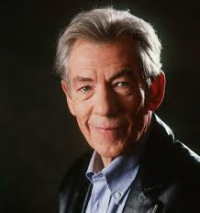 Activist, stage and film actor, winner of a Tony Award, and several nominations for an Academy Award and Emmy Award. Classical shakespearean actor, also notable recently for his role as the magician Gandalf in the trilogy film series 'Lord of the Rings'. It was in 1980 that he received international recognition with his Broadway performance of Antonio Salieri in the play 'Amadeus'. His career on stage and film has included roles such as Macbeth, Iago, King Lear, Sorin in Chekhov’s 'The Seagull', and the tramp Estragon in Becket’s classic 'Waiting for Godot'. Subject of the biography 'Ian McKellen: A Biography (2019). First actor to be named the UK's most influential theatre figure (2020). LGBTQ activist.