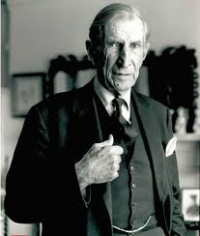 A British explorer and travel writer, Major Sir Wilfred Thesiger introduced the cultures of Africa and Arabia to western countries. An avid photographer and writer, his massive collection of work presents a lifetime of living and travel in these regions.

Born himself in Ethiopia as the son of a diplomat, he returned to Britain to study at Eton College and the University of Oxford on the subject of history. While at Oxford, he was the treasurer of the Oxford University Exploration Club. He also discovered the excitement of photography during his school years.

On graduation, Thesiger returned to Ethiopia and led several exploratory excursions throughout Africa and Arabia. He was often the first European to set forth in many of the areas he ventured, including that of Lake Abbe. He served as a commissioner in Sudan from 1935 onwards. When World War II broke out, Thesiger became a member of the Sudan Defence Force, and subsequently served with special operations in Syria and North Africa.

After the war, Thesiger joined the United Nations effort to tackle the lotus infestation in North Africa in its efforts to protect food supplies. Between 1945 and 1949 he embarked on his most famous journeys in the deserts of Arabia, being the first to map many of these regions. He travelled extensively with the local tribes and lived with them as equals. Areas that he explored include the Jejaz, the Assir and Najran, Iraq, Kurdistan, Nurestin, Abyssinia, Kenya, Yemen, Iran, and Afghanistan.

These travels led to deep personal connections with the indigenous tribes and their cultures. He adapted quickly to local lifestyles and considered himself a protectorate of their way of life and their rights to their lands and tribal setups. This often brought him into conflict with larger political aims of exploration, such as with the oil companies who attempted to explore the rich oil fields in the area. Thesiger’s closest relationships throughout life were with his Bedu companions in Arabia, or Iraq and Kenya.

Throughout, Thesiger wrote eleven popular books on the regions and its peoples. His most notable books are Arabian Sands (1959), The Marsh Arabs (1964), The Last Nomad (1979), and The Life of My Choice (1987). All were inclusive of his rich collection of photographs, and they accurately portray him as the last great explorer of these unknown regions.

Thesiger has received numerous honours and awards for his work. He won the founder’s medal of the Royal Geographic Society. He was appointed a Commander of the British Empire (1968) and was knighted in 1995. He is a Fellow of the Royal Society of Literature (1982), the British Academy (1982), and received the Distinguished Service Order (1941) for his military achievements.

Wilfred Thesiger’s most powerful emotional bonds were with the men who were his constant companions and support during his explorations. He was portrayed by others as a somewhat eccentric misfit who preferred the simple life of adventurous travelling and risk-taking. In his autobiography he discusses how this brought him both the solitary world he craved and the few friendships and close companions of the native tribesman he came dependent upon. He observed that these were the happiest and most fulfilling relationships of his life.

Thesiger’s photographs reveal a man engaged in furtive embraces and voyeuristic encounters which set the pattern of his life. He details, for example, the sharing of his bed with his bodyguard, Lopago, when travelling in Kenya. Thesiger spent the final days of his life living with several adopted males from Africa.

Throughout his life, Thesiger developed strong opinions about male bonding. He was a rigid conservative in his lifestyle, yet he also believed the British to be best attuned to the needs and the protection of the local indigenous populations. Thesiger developed a romantic notion of his travels and his exploration that he effectively conveys in his published work. Much as with Count Eigel Knuth, he was the last of a dying breed of true explorers.