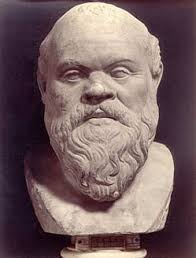 Socrates was a classical Greek scholar and the founder of Western philosophy, particularly on the issue of ethics and the process of logic. Slim records of his life exist and so knowledge of this comes from the writings of his students, such as Plato. After his required military subscription where he was known as a fearless soldier, Socrates began his working life as a master stonecutter. Eventually, Socrates adopted the teaching of philosophy and established a school for students on the subject, thereby earning income from teaching.

His innovation in teaching came through his introduction of the use of dialogue in what has become known as the Socratic Method. A range of inquisitive questions is volleyed back and forth among teacher and students to encourage insight into the solution of a posed problem. Socrates applied this method to distil answers and gain insight into moral problems of his day. The goal was to establish an ethical system of life and government based on human reason rather than doctrine, a radical departure from the tyranny of his time.

This process eventually led to his death by poisoning when he was charged with heresy and corrupting the minds of youth through his education programs. Many of the moral issues of the day centered on politics and the operation of government and its institutions of justice – discussion that would have generated intense opposition. It is believed he could have fled into exile, but his fearlessness as a soldier reappeared in his refusal to retreat when the decision of his death was declared.

Socrates’ concept of justice includes the importance of Virtue, being the notion that an individual should focus on self development more than on the utility of material objects. Socrates argues for people to develop friendship and love amongst themselves, a trait that relates to the goodness of the soul.

This Virtue was far more valuable than any material possession, Socrates argues, and the pursuit of it will lead man to a higher level of justice and beauty. Throughout his writings, Socrates is aware of the power of youthful male beauty to inspire and excite other males. In this sense, his dialogues (as portrayed through his student Plato) are infused with homoerotic undertones. He acknowledges that love will first be inspired by the beauty of boys, but then moves beyond that in positing that a love for beauty generally should take precedence over that for an individual. In this sense, Socrates argues that love should be directed at the broad ideals of justice and truth. Politics, then, takes precedence over personal relations.

Socrates praises love between males and does not disdain or forbid it. Rather, he allows for the temporary attainment of bliss achieved from individual love.

The complete lack of documentation prohibits any notion that Socrates was himself involved in any homosexual relationships. Indeed, it is known that he married and fathered three children, though it is also known that he devoted little time to his family in preference for his scholarly work.

It is argued that Socrates’ issues remain the prime issues of today. The world is in constant turmoil and upheaval, and the pursuit of justice and human rights is a never-ending quest. Society is in a continuous quest for the answer to the meaning of life, determining what makes us happy, healthy, and successful. Yet society also remains addicted to the pursuit of personal pleasure and material possession, as opposed to the pursuit of universal love and happiness that comes from a higher level of introspection.

His exhortation that individuals should pursue that which we know to be right based on knowledge and virtue is fundamental to standing up for individual rights. This is in spite of the fact that such views may be opposed by many.

If one extends the basic philosophical premise of Socrates that the pursuit of justice is best accomplished, in part, by the pursuit of virtue (or love amongst fellow man), then same sex attraction should be as legitimate a means of achieving that justice as for all other kinds. In this regard, the underlying premise of the fight for LGBTQ rights – that they are human rights – is grounded in the basic tenets of Socrates’ philosophy. This philosophy of equal rights has endured for countless generations and underpins the functioning of Western democracy.