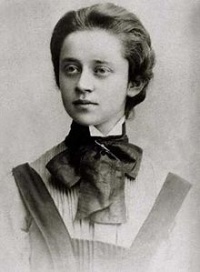 Only self-identified, openly lesbian Russian poet. Had a relationship with poet Marina Ivanovna Tsvetaeva, with whom she became involved in a passionate love affair that left important imprints on the poetry of both women. First book of verse, 'Poems', appeared shortly before she and Tsvetaeva broke up in 1916. The lyrics presented the first, non-decadent, lesbian-desiring subject ever to be heard in a book of Russian poetry. One of her masterpieces is considered the dramatic poem and libretto for Alexander Spendiarov's 4-act opera 'Anast'.