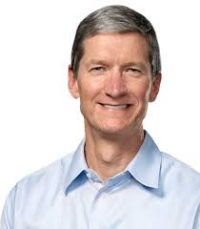 Having taken over the top job at the world’s largest technology company, Tim Cook made history in 2014 when he publicly announced that he was gay. This made him the first LGBTQ Chief Executive Officer of a Fortune 500 company. As a global personality, the event raised the visibility and respect of the LGBTQ community around the world.

After obtaining an undergraduate degree in industrial engineering from Auburn University in 1982, Tim Cook joined IBM in its personal computer division. He remained with that company in various positions of responsibility for twelve years, notably taking charge of manufacturing and distribution in North and Latin America. He left to become the chief operating officer at Intelligent Electronics. After three years in that position he moved to Compaq Computer Corporation as vice president of corporate materials, a job where he sourced and managed the company’s product inventory.

Six months later, Cook received a telephone call from the legendary founder and head of Apple Computer, Steve Jobs, with an offer to join the company. As Apple’s senior vice-president of worldwide operations, Cook managed all sales and operations worldwide. Within a year of taking the job, Apple Computer turned a loss-making operation into a profitable one, thereby giving Jobs the opportunity to introduce a slew of new product innovations – notably the iMac, iPod, and iPad. In January 2007 Cook was promoted to Chief Operating Officer.

In October 2011, Steve Jobs passed away after a prolonged battle against pancreatic cancer. Tim Cook, who had previously served as interim boss during Jobs’ medical leave, was announced as his successor. At the same time, Cook was appointed to the company’s Board of Directors.

When he took over the role of CEO of Apple, many questioned how he could possibly follow in the footsteps of the legendary Steve Jobs. However, he has done so with great success, introducing new products such as the iWatch, and new versions of existing products such as a larger iPhone. These were accompanied by a solidifying of new distribution agreements in countries such as China. This translated into financial success for the company.

In May 2004, Apple announced its biggest acquisition to date when it bought Beats Music, founded by rap musician Dr. Dre, for US$ 3 billion.

When he formally acknowledged that he was gay in 2014, he stated that he did so publicly to help others who are LGBTQ but are struggling with that identity. Although he admits he is a private individual when it comes to issues about his personal life, Tim Cook acknowledged that the public benefit of standing out on this issue far outweighed any private considerations. He is an important role model for the LGBTQ community and his statement will have a very positive influence around the world. Tim Cook’s public statement reinforces the company’s slogan ‘Inclusion inspires innovation’.

In April 2002, Time magazine included Tim Cook on its ‘100 Most Influential People in the World’ list. In addition, he received his home state of Alabama’s highest civilian honour in 2014. Nevertheless, Cook prefers to remain quiet and unassuming with the press about his accomplishments and his private life. He is known as being very frugal with the company and his private life. Despite this, he is seen as a very strong manager and personable with his employees.

During his tenure to date, Apple stock has become a mainstay for investors and has recently reached all-time highs. There are various bets in the market as to when the company will be the first to reach a market capitalization of US$ 1 trillion (with current market cap of US$ 700 million). Apple recently replaced the venerable AT&T company in the Dow Jones Industrial 30 index.

Tim Cook proudly declares that his success as a business manager is due to his lack of fear about failing. This characteristic has allowed him to take risks, both personally and professionally, with less concern about a bad outcome. As long as the good outcomes continue to dominate, Tim Cook is destined to continue to be a ground-breaking business leader in the LGBTQ community.