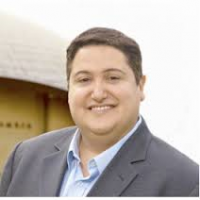 Former Mayor (2011-2012) of Hobsons Bay, Victoria located near Melbourne. Councilor (until 2014) and current Deputy Mayor. Bail Justice and Justice of the Peace. The world's first Intersex mayor and elected individual. Vice-President of Organisation Intersex International Australia. Biologically born with both male and female physical attributes (known as Partial Androgen Insensitivity Syndrome (PAIS)), he has identified as a male, female, and Intersex during his life. The law still does not assign a sex to him.