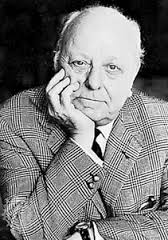 Modernist classical music composer for opera, theatre and film. Compatriot of Aaron Copland and Leonard Bernstein, among many others. Notabel works include the operas 'Four Saints in Three Acts' and 'The Mother of Us All' (both with texts by Gertrude Stein with whom he formed an artistic collaboration), scores to 'The Plow That Broke the Plains', 'The River', and 'Louisiana Story'. Music critic for the New York Herald-Tribune(1940-1954). Prolific author.