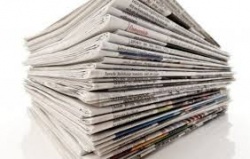 Despite the increased use of technology to transmit information about the LGBTQ community, there remains a plethora of national and local LGBTQ magazines and newspapers. These organizations have tended to produce both print and electronic versions of their publications, and are often part of larger LGBTQ-focused business organizations.

Several of these magazines have received international readership stature (such as Out magazine and The Advocate of the United States, or Gay Times and PinkNews of the United Kingdom) and encompass global issues that affect the LGBTQ community. The majority, however, remain focused on their local communities and issues. Some of the publications have ceased to exist but were material players in the advancement of LGBTQ rights around the world in the past - there is a rich history of the contribution of queer journalists to the coverage of LGBTQ issues.

In the United States, The National Gay Media Association has been formed as an interest and lobbying group of the leading LGBT newspaper publishers. As well, the National Lesbian and Gay Journalists Association has been formed as an organization of journalists, media professionals, educators and students working from within the news industry to foster fair and accurate coverage of LGBT issues.</p>