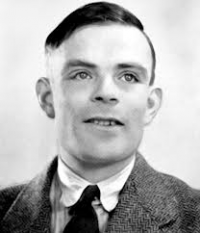 Alan Turing is considered the father of the computer science profession. He was a mathematician, scholar, and computer scientist whose work and inventions created the early operating logic for today’s computer operating systems, including algorithms and computation methodologies.

Turing’s natural inclination to mathematics and science was noted by his teachers at an early age. Unfortunately, the early signs of genius, together with his innate shyness and inward personality, also isolated him from his fellow classmates. It was at this early stage of his life that he realized his particular attraction to the same sex, and he developed a very close personal relationship with classmate Christopher Morcom. Morcom’s early death at this time profoundly affected Turing for the rest of his life.

Turing obtained an honours degree in mathematics from King’s College Cambridge in 1934. He went on to obtain his PhD at Princeton University shortly after he proposed the notion that an electronic machine could perform computations with exact precision using a specific process of logic. This was the theoretical foundation for his later work in creating such a machine.

Turing was given the opportunity to do so when he was hired to a team of analysts asked to break the secret code used by the Germans in the Second World War to transmit their battle plans to their forces. He did so by developing a statistical technique of analysis of the code that was undertaken by an electronic machine. This machine analyzed and deciphered the sequence of the signals used in the code.

His success in breaking the code is today considered a major advancement for the Allies in defeating the Germans in the war. Turing was personally responsible for the theoretical work that went into the project and the invention of the machine that analyzed the code and computed the solution. The detail of this work was considered so top secret by the British government that its existence and content was not made public until 2012. It has been argued that Turing’s work and success shortened the war (by revealing German strategies in advance of their execution) by four years and was responsible for saving millions of additional lives.

Subsequent to the war, Alan Turing worked at the National Physical Laboratory in designing the first stored-program computer. This machine executed its first successful program in 1954. Turing also taught at the University of Manchester in the Mathematics and Computing departments.

Throughout all of this time, both during the war and after, Alan Turing acknowledged his homosexuality but continually fought the usual demons associated with it, based on a society which rejected such sexual attraction and behaviour. In 1952 Turing was charged and convicted of sodomy, to which he confessed. He accepted a penalty of ‘treatment’ to erase ‘the disease’.

This conviction led to his dismissal from his work with any government agency with respect to his computer projects. The distress of the treatment combined with the mental anguish of his homosexuality eventually led to his death by suicide in 1954.

Alan Turing has posthumously received a significant number of awards and recognitions for his ground-breaking work. He is regarded as a national hero and one of the most outstanding and important individuals in contemporary world history. Turing is considered an LGBTQ icon of the highest order.

However, only recently has the British government acknowledged its errors in the charges and treatment of Alan Turing. The government issued an apology and pardon for his prosecution as a homosexual.

What is that makes the government and others do an about-turn in recognizing the talent of Alan Turing? It is a recognition of his contribution to the effort to end a war and its bloodshed. It is also a reflection of the shame of a nation in treating a hero so callously for behaviour based on a pure emotion of peace and love. Time will tell if this reversal of treatment is a reflection of the move to a greater acceptance of LGBTQ individuals and their contributions.

A movie of his life, 'The Imitation Game', a biopic about Turing which stars Benedict Cumberbatch and Keira Knightley, was released in 2014. He received a Royal Pardon in 2013. Turing was voted by BBC viewers as the most iconic individual of the 20th century.