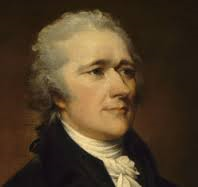 As a founding father of the United States of America, Alexander Hamilton was appointed the first Secretary of the Treasury and laid out the early foundations for the operations of the country’s financial system. This included the funding of the union and the states’ operations, tariff policies, establishment of a national bank, trade relationships, and currency matters.

Born to an impoverished family on the island of Nevis and orphaned at the age of 13, Hamilton was adopted by a merchant. He was sent to New Jersey for education and then attended Princeton University and Columbia University.

In 1775, Hamilton joined the volunteer militia of the revolutionary brigades. He successfully participated in a number of early military campaigns as troop leader. Later, he was offered a position as an aide-de-camp to George Washington with a rank of lieutenant colonel, a position which he served for four years. He was given his own command in 1781 and, with a successful assault on Yorktown in New York state, helped defeat the British military operations. He was appointed to the Congress of the Confederation as a New York representative and as a delegate to the Constitution Convention. Hamilton resigned from Congress in 1783 to practice private law. In 1784, he founded the Bank of New York.

President Washington appointed Hamilton as the first United States Secretary of the Treasury in 1789. The financial structure of the government would then be created under Hamilton’s supervision. He made recommendations on the operation of public credit, tariffs and taxes, the national debt, and he dealt with the issue of state debt incurred and outstanding up to that time.

Hamilton suggested the creation of a national bank to service the government’s needs. He faced a difficult time with its passage through government on the belief by many states that it represented an attempt to reinforce the power of the Northeast states. Nevertheless, his bill passed into law in 1791. Accompanying this was a bill to establish the U.S. mint, and this passed into law in 1792. Other legislation he created dealt with the government’s approach to industry (protective duties, employment, and immigration issues), excises on whiskey, and custom collection. Hamilton resigned his post in 1795 after accomplishing a great deal in building the early financial foundations of the new country.

Alexander Hamilton resumed his law practice and he remained an advisor to George Washington. He was appointed a Major General in the army in 1798 and served as its inspector general until 1800, acting as its most senior officer. During the elections in New York State in 1804, the defeated candidate Aaron Burr accused Hamilton of insulting him and challenged him to a duel. Hamilton was mortally wounded and died shortly thereafter.

Alexander Hamilton’s attraction to men was well known in his youth. Though he married Elizabeth Schuyler in 1780 and fathered 8 children, he was also known to have had an intimate relationship with fellow soldier and aristocrat John Laurens when they were both aides to George Washington. Laurens was killed in a skirmish in 1782. There was a series of letters between the two which confirm the relationship, though neither acknowledged publicly the feelings between them. For a time, Hamilton lived with Hercules Mulligan in New York. It has even been intimated that George Washington may have had a close and intimate relationship with Hamilton, as with other young men. Hamilton remained intimate with General Frederich Steuben in his later years.

There is no doubt that several of these male relationships were the most important romantic ones in Hamilton’s life, as revealed by correspondence. Why is there the need of biographers to dismiss these letters and avoid addressing the issue? There has always been a tendency to avoid discussing same-sex affection for fear that the disclosure would somehow diminish the degree of accomplishment or taint the outcome. Hamilton’s tremendous accomplishments speak for themselves, and recognizing the full extent of his life as lived does not alter the course or content of his role and the skills he exercised in achieving them.