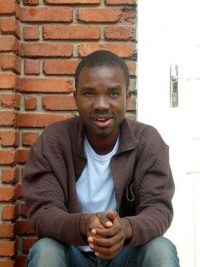 Brutally tortured and murdered for being gay. First as a journalist and later as executive director of CAMFAIDS, a Yaounde-based human rights organization, he documented violence, blackmail and arrests targeting members of Cameroon's gay community. He was also a regular contributor to the Erasing 76 Crimes blog, which focuses on countries where homosexuality is illegal, and he wrote several chapters of a book released in February on the global gay rights movement titled "From Wrongs to Gay Rights."