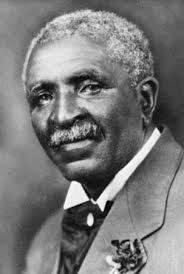 Agronomist, noted for his scientific work with peanuts as a source of protein, oil, and industrial uses, which greatly improved the fortunes of southern farmers during his time. Professor at Tuskagee Institute. Achieved significant acclaim and numerous awards for his works, including the George Washington Carver National Monument. Appointed a member of the Royal Society of Arts (1916). Made great strides in civil rights as a black scientist.