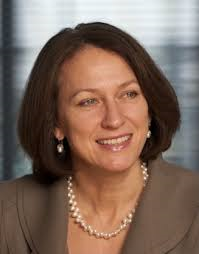 As the first female Chief Executive Officer in the 327-year history of the Lloyds of London insurance market business, bisexual Inga Beale is recognized as the most influential woman in the global financial industry today.

Born to a Norwegian mother and English father in Great Britain, Beale studied accounting and economics at Newbury College. During her school years, she became a competitive rugby player who had the option to carry on to the international level – a sport she continued to play into her thirties.

However, she chose instead to enter the insurance industry upon graduation, this also despite the urgings of her father to proceed into the accountancy profession where he made his mark. She joined the Prudential Insurance Company in 1982 as an international treaty reinsurance underwriter. She left the Prudential in 1992 to move to General Electric’s insurance arm in the United States as an underwriter before moving on to a management position with the firm.

A series of successive senior management positions with GE Inusrance Solutions in Europe followed, including President of GE Frankona and Head of Continental Europe, Middle East, and Africa. However, she left GE to join the struggling Swiss reinsurer Converium as its Chief Executive Officer in 2006. After a successful turnaround, Beale joined Zurich Insurance Group in 2008 as a Group Management Board member with specific responsibilities for Mergers & Acquisitions, Organizational Transformation, and Internal Consulting. In 2009, she was appointed the company’s Global Chief Underwriting Officer.

Beale returned to London in 2012 to head up a Lloyds insurer, Canopius. It is from this company that she was eventually recruited to be Lloyds of London’s Chief Executive Officer in 2014.

Lloyds of London is the premier provider of specialist insurance products for complex risks around the world. Founded in 1688, it has a long and illustrious history in the financial industry. Known for its conservative and stodgy operating culture, it did not even allow women to enter the underwriting room until 1972. So, one of Beale’s first tasks was to establish a modernization program within the company to make it more relevant to today’s highly competitive insurance industry, including creating a strategy for employment diversity which has been dubbed the Inclusion@Lloyds initiative. She followed this with the Pride@Lloyds initiative as a resource for the company’s LGBTQ employees. As Beale has stated, inclusion is the foundation for innovation that leads to success in today’s challenging business world.

Beale’s co-workers and acquaintances describe her steely and tough persona, honed from her days as a rugby player, as a benefit for her in dealing with the conservative and masculine culture of the financial services industry. Any initial skepticism from the industry with respect to a woman leader of this august institution was quickly put to rest with the success she has achieved.

The fact that Lloyds of London is the principal player in the global insurance market for specialty insurance makes Inga Beale an influential business person around the world. The company provides insurance coverage to nine out of ten companies in the Dow Jones Industrial Average.

Her principal role at Lloyds includes the management of the diverse group of ‘names’, or competing independent syndicate members who underwrite the issued insurance policies, of the insurance group. As part of this, she must manage the extent of risk being taken within the overall group. Because the nature of the insurance underwritten is highly complex and has little diversity by way of its product, Beale must ensure that there is no exposure to catastrophic risk that can wipe out the capital base of the combined group. This did occur in the Lloyds syndicate group in the early 1990s and almost destroyed the company.

Beale is fully committed to the principals of diversity in the business workplace, again a trait drawn from her personal experience. She previously lived with a female partner for a number of years, but married Phillippe Pfeiffer, a jewellery designer, in 2014. In 2015, Beale was the first woman to top the Power List of the world’s leading LGBTQ executives.

Beale was appointed a Dame of the British Empire (2016).