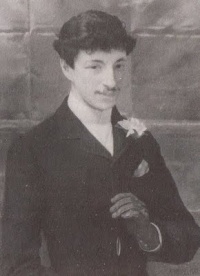 Poet, patron of the arts and noted critic of Oscar Wilde. Partnered with John Gray, though converted to Catholicism and in public kept a distance. Regarded as an expert on homosexuality at the time, based on his view that homosexual orientation is equivalent to heterosexual though practices are sinful. novels include A Willing Exile (1891) and Self Seekers: a Novel of Manners (1897). His collections of poems include Cyril and Lionel and Other Poems: A Volume of Sentimental Studies (1884), Tuberose and Meadowsweet (1885), In Fancy Dress (1886) and It Is Thyself (1889). His plays included Roses of Shadow (1893), Black Sheep and The Blackmailers (1894) and A Northern Aspect and The Ambush of Young Days written with John Gray in 1895. In 1896 Raffalovich published Uranisme et Unisexualité, a work on homosexuality, which included his essay ‘l’Affaire Oscar Wilde’.