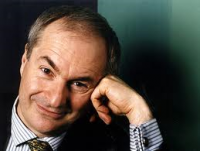 Radio and television presenter. Chairman of the Radio 4 music quiz 'Counterpoint'. Inducted into the Radio Academy Hall of Fame in 2005. Author of more than 15 books. In 1995, he was named Philanthropist of the Year by the National Charity Fundraisers for his work on behalf of the Terrence Higgins Trust. He is a patron of the London Gay Symphony Orchestra. Contributor to Rolling Stone magazine. Was recently charged with inappropriate sexual activity.