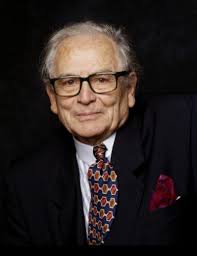 Women's and men's fashion designer. Founded the House of Cardin in 1950, initially concentrating on costumes for film and theater, then in 1953 showed his first women’s collection and in 1957 his men's collection, marketed as 'Adam'. Known for his geometric designs. Broke new ground by licensing his name for use on different types of goods, including perfumes, cookware, soaps, chocolates, cigarettes, and cars. He expanded beyond fashion by operating performance spaces, hotels, and restaurants (he bought Paris’s famed Maxim’s in 1981), and by producing stage musicals and dance programs. He entered markets once ignored by Western designers, including Eastern Europe, China, Japan, and the Soviet Union. Designated a UNESCO Goodwill Ambassador in 1991, and a United Nations FAO Goodwill Ambassador in 2009. Subject of the documentary 'House of Cardin' (2019). Had a long romantic relationship with André Oliver, who was his partner in design as well as life. Bisexual.