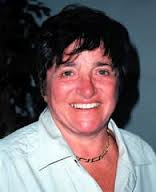 Stand-up comedian, noted for her presentation of 'Always A Bridesmaid, Never a Groom'. One of the first lesbian stand-up comics on national television. Produced the first International Gay Comedy Festival which took place in Sydney, Australia, in conjunction with Sydney Gay Mardi-Gras (1994). Presented with the first ‘Outlaugh’ Festival Award at the Comedy Store, for being the first lesbian or gay comic to come out on stage, recordings, and television. Currently runs an LGBTQ travel company. LGBTQ activist and columnist.

Executive Director of The Equality Campaign, and the first lesbian plaintiff to sue the state of California challenging the state's ban on same sex marriage (2004-2008) - after a successful win, she and her partner were the first to receive their marriage license in the state. Co-founder and national rally coordinator for StopDrLaura.com.