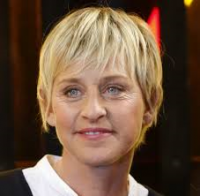 As a professional comedian and actor, Ellen DeGeneres is an American entertainment star who single-handedly raised the profile of the global lesbian community to new levels of acceptance and respect. In 1997, she was the first open lesbian to play an open lesbian character on television. From there she went on to great fame in the entertainment profession.

DeGeneres started as a stand-up comedian at small local clubs in her home town of New Orleans, Louisiana. In the 1980s she travelled extensively throughout the United States and was named Showtime Television’s ‘Funniest Person in America’ in 1982. Her big break came with her appearance on the late-night talk show The Tonight Show. Thereafter, her public profile and comedic reputation grew quickly. She began appearing as a guest or feature comedian in numerous high-profile television and stage shows.

Beginning in 1994, her comedy routine became part of a new television series called Ellen on the ABC television network. During this time, Ellen grappled with her lesbian sexuality and how best to present this to her growing audience of admirers. In 1997 she announced her sexual orientation on the popular Oprah Winfrey chat show, becoming that show’s highest-rated episode with 42 million viewers. Immediately thereafter, the character played by Ellen on her sitcom also came out as gay, though not without considerable public controversy. The show was eventually retired in 1998, but was briefly resuscitated in 2001 on the CBS television network.

In 2003, the Ellen DeGeneres Show was launched as a daytime talk show. This quickly became a massive success, winning 4 Daytime Emmy Awards in its first season (being the television industry’s highest accolade). Over the years, the show has won a total of 35 Emmy Awards. Almost every popular television, theatre, and movie star has appeared on the show at one point.

DeGeneres expanded her popularity and exposure by appearing in many other entertainment ventures. In 2010 she was a judge in the popular American Idol reality television singing competition. She has hosted the 2001 Emmy Awards, and the 2006 and 2014 Academy Awards presentations. DeGeneres has leant her voice to the animated movies Finding Nemo (2003) and Dr. Doolittle (1998). She has been the spokesperson for cosmetics company CoverGirl since 2008, appeared in American Express promotions, and appeared in advertising for J.C Penny since 2012. In addition, DeGeneres has authored two best-selling books on her life.

The process of coming out was an important decision for Ellen DeGeneres. She has used the publicity from this announcement and her subsequent high profile to advance the exposure and the rights of the LGBTQ community. DeGeneres is a public advocate for the Parents & Friends of Lesbian and Gays (PFLAG) and the Human Rights Campaign (HRC) organizations. She has been a Global AIDS Awareness envoy since 2011. Her marriage to fellow actor Portia de Rossi in 2008 further bolstered the awareness and respect of the global lesbian community. In summary, DeGeneres has become an outstanding role model around the world for all LGBTQ individuals.

In 2016, Ellen DeGeneres was the recipient of the Presidential Medal of Freedom.

How does one reconcile the often superficial aspects of the public popularity of entertainment stars with the real-life challenges of the LGBTQ community? There have been many visible LGBTQ individuals in the entertainment industry over the years, but how do you judge their effectiveness and contribution in representing the hard reality of intolerance and marginalization? In some respects, the advancement of global LGBTQ rights is a step-by-step approach, and the visibility attached to celebrity is an advance forward. In this respect, Ellen DeGeneres has played a big part by taking an early visible stance on her own sexual orientation and then working with the community to advance issues that are important to it. It is not realistic to put the burden of action solely on the shoulders of a few individuals, but certainly those in positions of visibility and influence should be expected to be honest about who they are and the negative outcome of intolerance and bigotry. In this regard, Ellen DeGeneres has been a shining representative of the community.