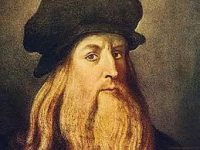 Leonardo da Vinci is one of the most widely celebrated geniuses in human history. His immense talents encompassed painting, sculpture, mathematics, engineering, architecture, writing, botany, and more. Despite his childhood rearing of peasantry, his innate talents in all of these fields were quickly acknowledged and he rose to become the quintessential Renaissance man of his time.

His paintings and drawings are what we regard today as his principal focus and talent. Specifically, his paintings titled The Baptism of Christ, The Mona Lisa, The Last Supper, and his drawings of the Vitruvian Man have been known to everyone since their creation. Today, the Mona Lisa is considered to be the most famous painting in the world.

Outside of painting, da Vinci is known for his intricate analysis and drawings of the human body and ideas for inventions. These are encased in his extensive journals and writings on his studies of natural philosophy, a body of work which accumulated to over 13,000 pages during his lifetime. Da Vinci utilized the power of observation, a necessity due to his lack of formal education, to both detail the daily goings-on around him as well as to imagine and invent new designs and processes.

This activity led also to his drawings for various engineering processes that he imagined, such as mechanical pumps, musical instruments, his famous flying machine, bridges, and more. Each of these drawings was created from his daily bouts of fascination and imagination.

As a man of his time, Leonardo da Vinci easily and ingeniously combined science with art on a daily basis. He recognized the intricate detailing and workings of various mechanical systems he encountered while at the same time appreciating their artistic and visual elements. Da Vinci transposed complex engineering pieces which operated on a relative-ratio basis into intricate works of art.

In addition, da Vinci’s detailed drawings of internal human organs were the first of such to ever be recorded. This represented his process of integrating nature into his imagination and eventually his inventions.

As a person, da Vinci was known as a homosexual man. We know that he surrounded himself with beautiful young men. At the age of 26 he was charged with sodomy, though the charges were dismissed on a lack of evidence. The principal heir and executor of his estate was his lover and assistant, Francesco Melzi. He wrote extensively about this relationship in his personal journals.

Sex and intimacy were certainly a part of his art and paintings, to the point that even today his Mona Lisa is revered for the transfixing gaze of its portrait subject. All of his portrait work contains this element of seduction, which in turn makes them so attractive to the viewer. This was intended by da Vinci to inflame passion in the viewer and to expose more of the subject’s internal beauty than its external.

Perhaps this is why Leonardo was so fascinated in biology and botany and drew so prolifically of the internal human organs of the body. It appears that he relished the opportunity, as a gay man, to sublimely portray the true nature of man – his artistic emotional form – by presenting artistic images and operations of the actual internal beauty of the human.

If the homosexual can generate such intense art form and invention as to expose one of the world’s celebrated geniuses, why is that the world is so intent on suppressing the sexual and emotional urge? The ability to be true about oneself without lack of moral or religious constraint can allow for the free creativity of the imagination to present itself in various art forms.

The existence of such restraint does not stop or remove true sexual urges. It may suppress them externally, but the artist will still experiment and reveal it subliminally through visual form or other medium of communication. Is this the underlying story of the success of da Vinci and his life’s work?