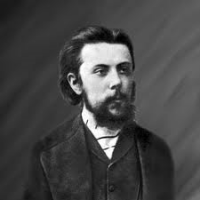 Classical composer of the romantic period, noted for his innovations in music that often went against the conventions of Western music at the time and henced was viewed as 'extremist'. Was a tortured individual because of his hidden LGBTQ desires, which led to alcoholism. Notable works include the opera 'Boris Godunov', the orchestral tone poem 'Night on Bald Mountain', and the piano suite 'Pictures at an Exhibition'. Considered one of the greatest Russian composers, along with Peter Illyich Tchaikovsky.