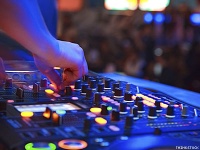 Disc Jockeys (DJs) have become high profile individuals in today's celebrity, communications, and entertainment scenes. On radio, they present and judge relevant music for public consumption, while in public they are called on to provide musical entertainment at parties ranging from private to mass public gatherings. It is common for them to attach the title 'DJ' to their names to denote their profession.

Radio personalities are the most common form of DJ in history. The invention and subsequent popularity of radio created the opening for presenting and ranking of popular music, with the first radio disc jockey in history emerging 1909 and the term itself created and popularized in the 1930s. For example, bisexual DJ Alan Freeman of Great Britain is famous for having presented the weekly 'Top of the Pops' ranking of the singles charts on BBC1 for many decades beginning in 1960. The popularity of Disco music in the 1970s and the dance clubs spawned by that music genre created further momentum for the DJ profession. Today, popular DJs are active in many music genres, particularly hip hop, rave, and club music.

The popularity and celebrity culture of DJing led to the creation of a cadre of electronic artist professionals who utilize multiple turntables and electronics to combine and interpret unique variations of recorded vinyl album music. There are several techniques used, such as phrasing, mash-up and beat matching, and an individual DJ often distinguishes themselves from others through the popularity of their unique mixing style. Today, the presence of digital music has furthered the techniques used in electronic DJ music utilizing mp3s, for example. That popularity has often led to DJs participation in other forms of entertainment, such as film and sporting events.

The Disc Jockey profession is popular in LGBTQ culture, particularly through its participation in global mass dance events. These events emanated from local block parties in large urban areas. Several transgender Disc Jockeys are prominent, including Brooklyn-based Octo Octa and Terre Thaemlitz (known as DJ Sprinkles). We have identified the following LGBTQ individuals who are prominent in this profession: