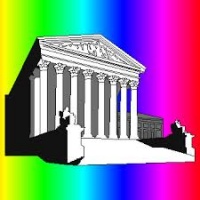 We have identifies several LGBTQ lawyers who have been appointed Justices or Chief Justice of their country's highest court level. This may be their country's Supreme Court, High Court, Constitutional Court, or other legal institution.

They each have fascinating biographies. For example, do you know:

In 1993, the International Association of Lesbian, Gay, Bisexual, and Transgender Judges (IALGBTJ) was formed by 25 judges as an LGBTQ interest group. The objectives of the Association, adopted at that meeting, are: