Difference between revisions of "The Two-Spirit, Aboriginal, and Native LGBTQ Community" 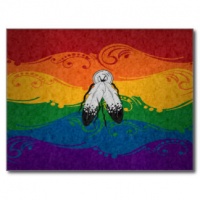